Looking to get some assistance if possible.

Prior to a development cycle we set what we think is achievable in an upcoming release by tagging issues in a Planned Version custom field.

We are currently tagging all issues with fix version which will denote the actual release that the story is delivered in.

What I am trying to do is to calculate the % of what we actually delivered to evaluate our planning accuracy. The following calculated measure gives me the actual story points delivered on time which I can then divide by the original story points planned in a later measure but that is hard-coded.

When replacing the filter logic with something like:
[Measures].[Last Fix Version] = [Measures].[Last Planned Version]
that gives me the sum of all story points that are delivered on time across all the versions.

FYI Last Fix Version and Last Planned Version are calculated measures to convert our planned and fix versions into format YY.MM so they can be compared numerically in other reports.

Any guidance is appreciated.

To get the percentage of issues with the Planned version resolved in the Last Fix version, you can define a calculated measure similar to the one below:

With this approach, you can add only one of the dimensions to the report pages and select the desired version. In my case, I placed the Target Release dimension on pages. It is based on a version picker custom field in Jira. The formula portion below returns the corresponding Fix Version dimension “By name” hierarchy member with the same key as the currently selected Target Release dimension member:

It will work similarly if both dimensions are based on version picker fields. See the result in a report: 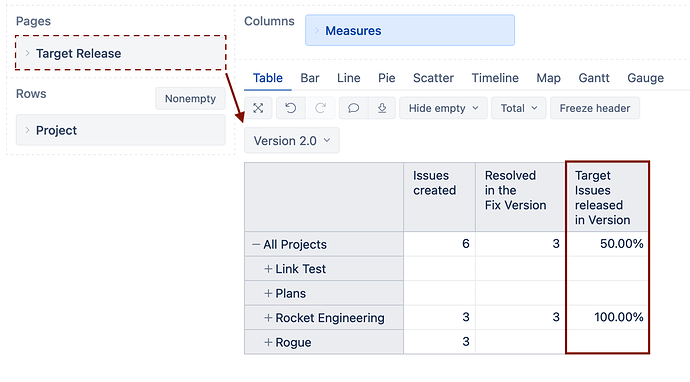