I am attempting to plot a couple of JQL queries onto an eazyBI chart, and have a couple of data sets that I use JQL to locate on the Jira side. I use Scriptrunner to find my issues as the specific scope is rather pointed.

In a nutshell, I am trying to find trends on the count of issues that are create week over week which are linked to a specific issue type. My base query is:

issueFunction in linkedIssuesOf(“issuetype = “build failure””) AND issuetype != “Build Failure” AND (resolution != “Won’t Fix” OR resolution is EMPTY) ORDER BY key

Basically, any issues that are linked to my build failure tickets that are not closed as “Won’t Fix”. (We use that to mark build failures that occurred to a valid test failure)

I looked around for some info on how to bring in linked issues, but everything is talking about importing specific link relationships, and I just need all links regardless of link type for issues linked to all issues of type build failure.

I understand you would like to get all linked Build Failure and then trace issues which are linked to Build Failure without resolution or some specific resolution.
In this case, first, you may import issue links to issues with type Build Failure. In advanced settings add definition to fetch those links and import as a separate dimension. There is a definition example; before applyin it update outwar_link and inward_link according to links in your Jira:

Zane,
Thank you for the response. I have imported the links already, however I need a count of this information per week, so I was attempting to place the Link into the columns with resolution, and week on the right. This was the setup I could not get to load. This is how I ended up getting it to work, but I created a separate account and only imported issues matching my jql string above to limit my scope, then plotted accordingly: 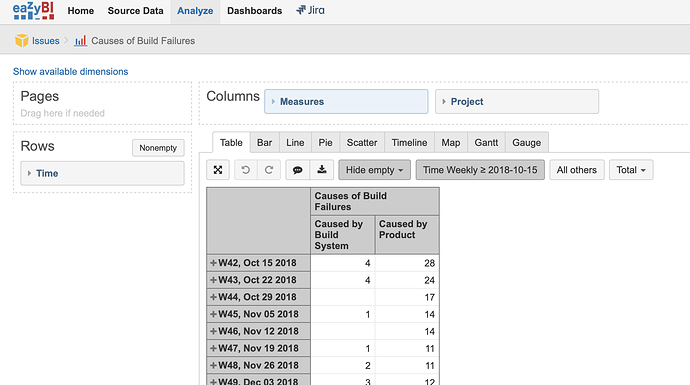