It seems to work correct when I use all issues, but when I start to add time split or group of “Logged by”, it runs super slow and I can’t create the report at the end.
Is there any way to optimize my measurements?

As I can read from your formulas, you are trying to count the epics having less than five hours from a specific project GMCS Business Requests. The problem with your formulas seems related to inconsistent use of the hierarchies of the issue dimension.

I would suggest trying out one of those formulas, providing the count of issues with less than five hours in two ways. 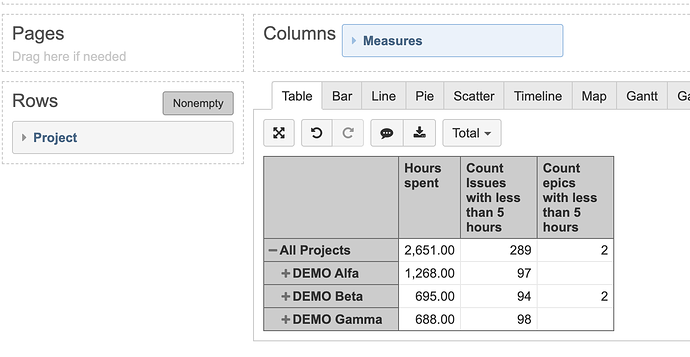 The use of this measure with the Logged by dimension should also work, but you need to take into account that now the Hours spent measure is limited to the specific user and shows the count of issues where the user has reported less than 5 hours.