Hello, we have been plotting milestone dates as vertical lines on a burn-up chart (timeline view), by keying in the date manually in the calculated measure. These milestones correspond to Epics, and we’ve discovered that eazyBI can recognize the Epic’s target end dates and plot as vertical lines using the below calculation.

Because we have a number of Epics, we’d like to not create each of these measures manually, is there a way for eazyBI to identify all the epics and end dates in one formula so that the epics will automatically appear and be updated if they are edited in Jira?

Similar to how “today” is noted below, we’d like all the Epic names to be identified on their target end date with one formula. Please let me know if I can clarify further. Thank you! 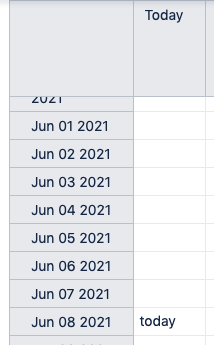 The formula you are using might give you one specific epic name based on the target date. You would like to set the Epic issue key as a parameter for the function GetMemberByKey, though. This formula will show an epic name for an epic with issue key DG-255 with a target end date in the time period.

Here Is my report example to show Epics with delivery date on time: 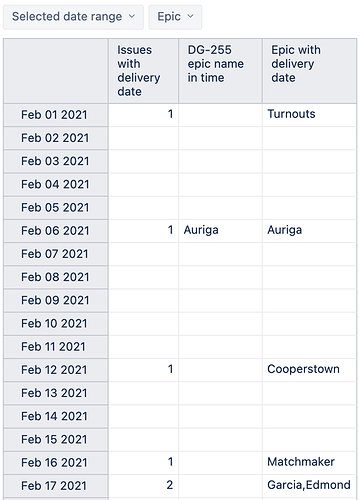 I used both formulas to show the differences. The first one will show explicit Epic. The second one will show any Epics with a particular day in the period.