I have put the Is Block dimension in the rows section and activated the Is Blocked at all members at level Is Blocked. It now shows me indeed the Is blocked issues in the table but at the same time it filters out the project issues that don’t have a Is Blocked relationship. I do want to still see them as well. How can I do that?

To stretch this requested a bit more, would it be possible to show the status of those Is Blocked issues in the same table?

Thanks in advance and have a great day.
Jurgen

Once those were added to the data source you can build reports with the bugs and linked tests or the tests and linked bugs. 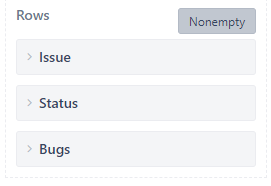 One thing I noted is you have to not use the hide empty or the only ones that show will be those that actually have an item linked.

Hi @Jlf4EazyBi ,
I would suggest adding the “Is Block” dimension at the “All level” and expanding it, and then you will also see those issues from the “Issue” dimension that doesn’t have this relationship.

And if you need some measures, e.g., see block issues statuses, check this training account were are some example measures you can use in your report. Copy the measures in your account, and adjust the dimension name “Bugs” in the formulas to the name you are using for your issue link dimension: Stories with Bugs details - Issues - eazyBI Demo Training - eazyBI

Thanks Gerda and Dennis. I am on vacation this week, but I will work with you suggestions next and let the result know in this post.

They “Is Block” at “All level” is giving me indeed the whole list but the expand makes the list twice as larges at it already is. I have around 120 jira tickets listed and with the expand it doubles the row count. Is it possible to have a mdx code that give the best of both worlds, so give the all hierarchy level members at level “Is Blocked” and if the result is empty still show the row just with an empty Is Block cell.

Then when I import the demo chart to see block issues statuses, I get an error “MDX object ‘[Bugs]’ not found in cube ‘Issues’”. In my case the blocking issue is not always a bug, can be anything.