Showing the Fix Version of the Parent Epic

In this case, you could first ensure that you have imported custom field “Epic Link” via eazyBI import settings.
That should create additional properties where the Epic key would be stored for each issue.

Next, you could create a new calculated member in “Measures” dimension using this code (and property Epic Link):

Note that this approach would work only for regular hierarchy in “Issue” dimension. 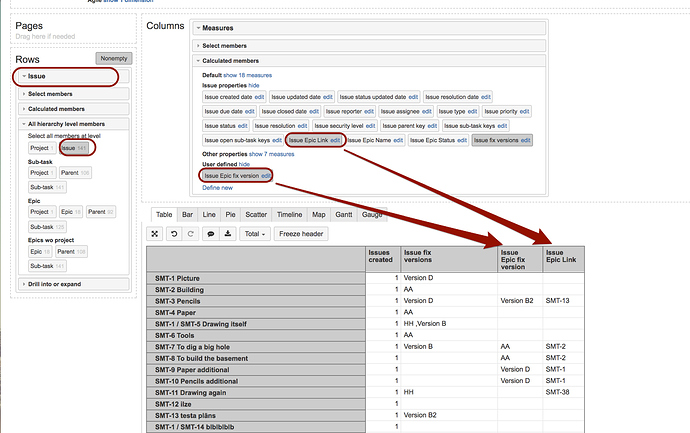 Thank you Martins. very good. I checked it and it works fine.
Thank you very much

Hi!
In the screen capture I see, within issue properties, the field “Issue fix versions”. I cannot seem to find this field in my measures dimension. I understand this should have been created automatically?
What would be the formula for this field?
Thanks!
— Jacques.

Indeed Jacques, you got it right. this is a user defined field. you wrote the correct formula.

Hi, I am having the same issue. I have seen that the formula you propose is not working on my side. It gives me an syntax error.

After using it, I can see a column with “issues fix version” but all items have “no version” on it. I am missing other versions we have in the project. What could be happening?

Are you sure you’re using this together with the [Issue] Dimension?
Put the Issue in the Row, and the Measures in the columns.
See attached

Yes, I am doing so and I can only see two options now from all the versions we have in JIRA (‘no version’ option and V 0.0.1). Somehow, eazyBI is not noticing the rest of all versions we have.

The showed issues are not all issues we have - eazyBI stops showing issues higher than issue number #1127 on this case. So all JIRA issues generated after that are not appearing in the table. Why is that? Maybe some synch issue?

Sorry, I don’t know what’s wrong with your report. May be you ask for EazyBI support to help.