We’d like to show a productivity metric (like “Issues resolved count” for all projects) over time, but normalized by the total number of Jira users/assignees. It looks like the Assignee member isn’t related to a time dimension, so I get a constant count of assignees over time.

Is there a way to define this time dimension for Assignees? Users don’t log their work, so “Logged By” doesn’t help either. 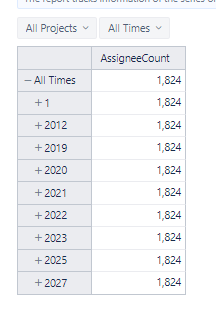 This is not a proposed solution, I only wanted to who how I defined the AssigneeCount measure.

Using Count() and iterating through “Assignee” dimension members is the right approach. Ther are few improvements you should add to make the calculation work, add the function Filter() and some predefined measure as filtering criteria. The measure would define how how issues (and their assignees) are related to the Time dimension.

For example, to get the assignee count of resolved issues in the period, use the measure “Issues resolved”:

Or you can filter by the measure “Issues history” to get a count of all assignees that were assigned to some issue in that period:

Here are a few more topics on how to count assignees:

Hi, The simplest solution for this use case could be to count the number of assignees where there are any issues created for this assignee in the period. The formula would be the following: NonZero(Count( Filter(Descendants([Assignee].CurrentMember,[Assignee].[User]), [Measures].[Issues created]>0 ) )) [image] Kindly, Janis, eazyBI support

Hi @Jo_Kr Yes, you may want to create a Maesure, that iterates through all Assignee dimension User level members and count those having open issues at the end of the selected time period: Count( Filter( [Assignee].[User].Members, [Measures].[Open issues]>0 )) Best, Ilze / support@eazybi.com

Get average of closed issues per week Questions & Answers

Hi @Yaron_Moon You can define a new calculated measure “Assignee counter” in the Measures dimension that will iterate through the Assignee list and count the number of Assignees that had an issue assigned to them during the corresponding week in rows. The formula would be along these lines: Count( Filter( DescendantsSet([Assignee].CurrentMember,[Assignee].[User]), ( [Measures].[Transitions to assignee], [Assignee].CurrentMember ) > 0 ) ) You can then define a new …