I have a text field in JIRA for recording traveller’s names which is imported as a property in my EazyBI import.
I have made the following table in EazyBI: 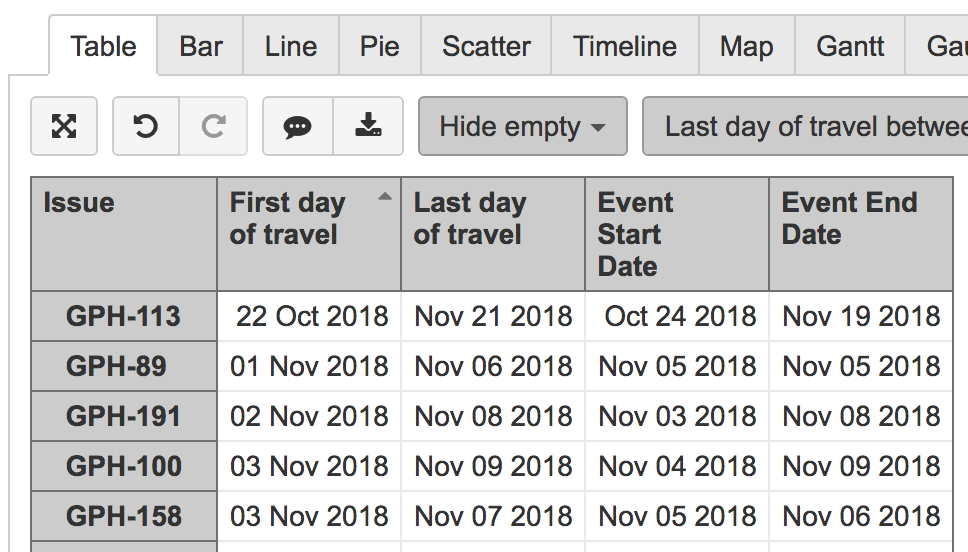 Ultimately, I want to display this table as a chart, showing a timeline of people’s travel using range bars.

Ideally I want to use the traveller’s name as the row, not the issue key. This is what I’m using currently in the Issue dimension:

I have tried in vain to create a calculated member that instead of the issue key pulls back the traveller’s name and uses that instead, but with no luck.

Grateful of any pointers.

Perhaps, this would be a good example how to display traveler in a bar chart with ranges
https://eazybi.com/accounts/1000/cubes/Issues/reports/50044-in-progress-issue-status-updated-date-on-datetime-bar

After that, you should be able to select custom field “Traveler” to import it as a dimension with member name length not more than 255 characters.

Thanks for this Martins, I really appreciate your reply

I’ve added the field as a dimension now and reimported, which is making the dimension come up now. When using the dimension in the rows and the same dates in the columns, the table is currently empty. I assume that this is because the referenced dates are attempting to access the End Date from the Issue Dimension, which I do not want to include in the report now that I have Traveller.

The Dates were previously referenced like this in the measures when I was using the [Issue] dimension:

Whilst I can include both the Issue and Traveller Dimensions in the rows and it will populate the rows with values it’s messy having to include the issue, I’d rather just use the new Traveller dimension. How can I make the dates work whilst including the newly added Traveller dimension only?

Grateful of your time

In this case, you could create new user-defined calculated members in “Measures” dimension to pull the date values for “Traveller” dimension member using the MDX code:

Try this code for “First day of travel for traveller” calculation

And don’t forget to choose appropriate formatting for the calculated member during its creation.

This code would find the first issue for “Traveller” dimension member and pull it’s value from a measure “First day of travel”
In the same way you could calculate your other 3 calculated measures.
After that, it is not necessary to use “Issue” dimension in your report anymore.

This approach would require filtering your report by measure “Issues created” to bind “Traveller” dimension members with the report context (later it is safe to remove the column)
see attached gif:

Martins, you are amazing!

This works just perfectly, thanks very much for your help, I really appreciate your time.

I discovered a problem when I noticed some entries missing. I think each traveller will only appear once using your proposed method because of the .item(0) line. How do I go about making the timeline include all travellers, no matter how often they have travelled? There should be an entry in the timeline every time they travel.

You are right, the code I shared would return for each traveller only the first issue’s properties.
To show for every traveller all issues I guess you should use both “Traveller” and “Issue” dimensions in rows.
Please reach out to support@eazybi.com for further discussion.