Me and my team are using the Burn Down Chart proposed in EazyBI documentation. The chart looks great and we’ve been leveraging it for some projects.

There’s an issue though that I think some MDX knowledge would be able to easily solve. Since the burn down chart counts Story Points Resolved only when they’re actually brought across the finish line, it’s hard to see the Day by Day progress with the Story Points.

The question is: would it be possible to create a logic by which every time a Story is moved into a different Status (“Open”, “To do”, “In Progress”…), the amount of story points resolved slightly increases by a predefined portion of the total story points assigned?

Please, let me know if the ask makes sense and how this would be possible to be build without duplicating story points or showing too much progress compared to the actual.

You might want to add measure Story Points history to see story point flow over time. And drill into this measure by dimension Transition Status >> Category to see the Story Point split by statuses at each period of time (see picture below). 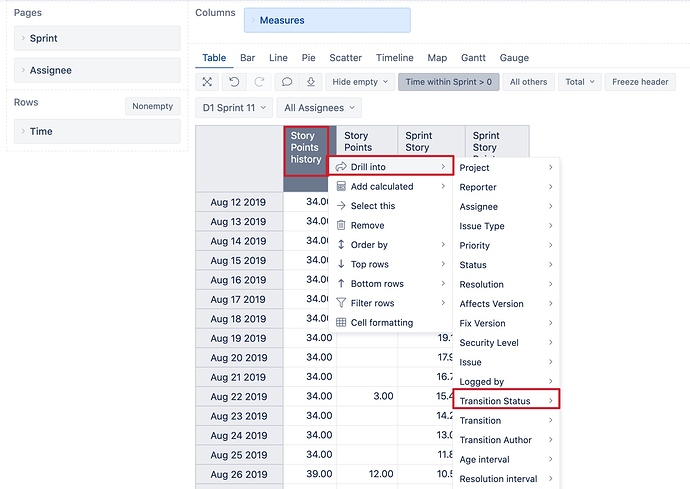 Then you can switch to Line or Timeline chart and visualize the Story Point flow by transition statuses or status categories:

More details on how to drill into measure by some other dimension are there: https://docs.eazybi.com/eazybijira/analyze-and-visualize/create-reports#Createreports-Drillintomeasurebyanotherdimensionlevel.