You can check if this formula might work for you:

It will sum data for all assignees on how many hours they logged on issues. The formula has a special condition for issue level. It will pick data faster using the assignee property of the issue to access the assignee user and get the logged time for this assignee.

Here is how the formula above works for issues: 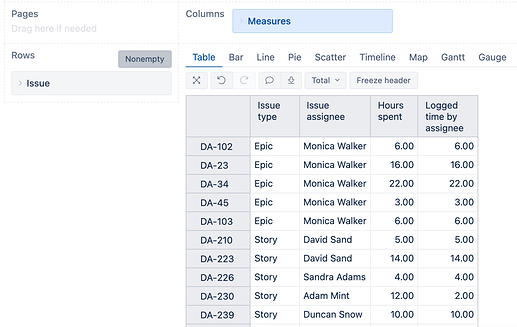 image1548×982 115 KB
In the example above, only one issue DA-230 there was another user than assignee logging time on the issue.

Here is how it works for the Issue type. It could be used with other dimensions as well: 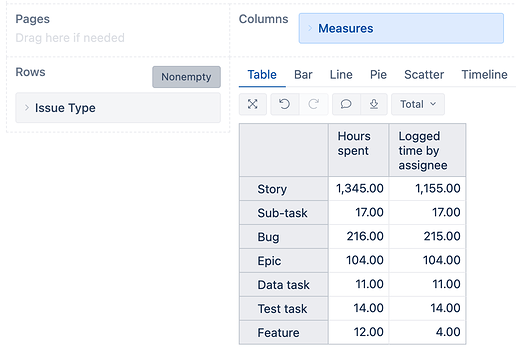 Thanks @daina.tupule for your feedback

If I added the time dimention in pages, will I need to modify the formula or it will work properly

Measure Hours spent is mapped on time to the start time of the worklog. If you would like to use time dimension on the report and count issues closed in the period, then you would like to consider custom calculation for this.

Here is one similar community topic with the example formula for resolution time. It will work for your needs if you will switch issue resolution date with issue closed date.

How to calculate estimate hours vs. actual hours Questions & Answers

eazyBI maps any measure to Time dimension. Measure Hours spent is mapped to the Time when logged hours was set for. This could be a different period than the one when you resolve an issue. You would like to use some calculation to access total logged time for resolved issues. I can suggest using a similar measure to the one you use for estimated time: Sum( Filter( Descendants([Issue].CurrentMember, [Issue].[Issue]), DateInPeriod( [Measures].[Issue resolution date], …