Filter Fix version by specific name and a status

HI,
I am trying to filter Version names of the fix version dimension, and I want to keep the released and Unreleased information.
To be clearer, here is an illustration of what I actually have and what I want to achieve.
In the example I wanted to filter the versions which has a name beginning by P1_ 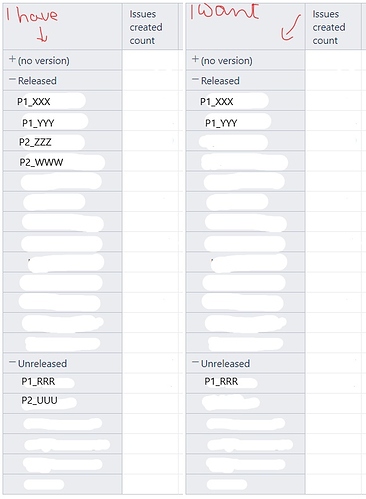 I tried to filter by defining a new calculated member in Fix version dimension like this:
Aggregate(
Filter(
[Fix Version].[Version].Members,
[Fix Version].CurrentMember.Name MATCHES ‘^P1_.*’
)
)
however the result shows only the right names and no more the separation with released and unreleased versions
I also tried filtering using the row matches, but it gives the same results.

Do you have any ideas to solve this problem?

I hope the explanation is clear enough.
Thank you very much.

Currently you can’t have a custom hierarchy in “Fix version” dimension where you could define custom levels.

In your case, the only option would be creating multiple calculated members in the “Fix Version” dimension (as you already tried).
Try this formula to aggregate all versions with P1 from unreleased status only

Then you could call it like “Unreleased P1” and create all the other necessary members for your report.

Thank you very match for your answer, It solves my problem.