How to filter Portfolio hierarchy splitting by custom filed values

Hi,
we are using EazyBI with JIRA Portfolio data. Our Portfolio hierarchy is:

Our goal is to calculate the distribution of work type of each project.
To do this, we’d like to be able to count issues sorting them according to a custom field that is set only on the parent issue type. As example, we have Initiatives with a custom field with value “Strategic” and we’d like to display the number of stories descendant of such initiatives.

In your experience, what’s the best way to achieve this?

The best way to achieve your requirement is to implement a new custom dimension using the advanced settings and Javascript code. The idea is that you can tell with the advanced settings to inherit down the value of the custom field from the higher level of the Portfolio hierarchy to the children issues.

You can add to the advanced settings the lines like this:

Once you save those settings you should see a new custom field available for selection in data import options. After you import this field as a dimension, it will show all the children issues under the parent’s value of custom field.
Note the following about the settings:
-) NNNNN is the ID of the custom field you wish to inherit down.
-) The exact Javascript code might depend on the data type of the custom field. My example is created for the Single select custom field.
-) The setting update_frome_issue_key refers to the 5th level of the hierarchy, which in your case is the top level “Inititative”. The numbering of levels starts from zero which is for the subtasks.
-) There is a simpler solution if you wish to inherit down the standard fields. Please, check the documentation here: https://docs.eazybi.com/eazybijira/data-import/advanced-data-import-options/issue-link-field-dimensions

Hi Janis,
thank you very much for your help.
I’ll try your suggestions.

Hi @janis.plume,
I confirm that the solution suggested by you works like a charm.

I only had to adapt it because my custom filed is a multi-selection one.

During these tests, I’ve found something weird about the import. Every time I updated the custom dimension into the advanced settings window, to force a full reimport I also had to add a random custom field into the Jira import options. Otherwise, I noticed that the import procedure was faster (1min vs 6min) but the updates of the javascript code weren’t taken into account.
Is it a known behavior?

Thanks for your help,
Claudio

Thank you for getting back.

You are right; the changes in advanced settings are not detected automatically for all the impacts. Once you change them, you need to trigger the full re-import for the changes to take effect. The selection of new custom field for import triggers the full re-import. Otherwise you can use either Empty cube option and run import after cube is empty: 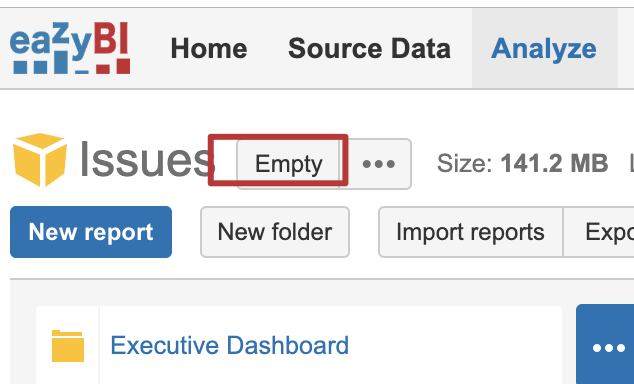 or select the full re-import from the data source:

I have another question related to this thread. I’m trying to create a new custom dimension for a JIRA dropdown menu with multiple selections.

I tried this code:

that is working fine in cases with a single selection.
With multiple selections, this code aggregates the (multiple) values in a single column. e.g. “AAA,BBB” instead of AAA and BBB

Dop you have any suggestions or best practices for this case?

Thanks for your help,
Claudio

you seem to be missing the options in the advanced settings:

and the last line of the script should be:

That should work for sure.

Hi @janis.plume,
I think I need your help with an issue related to this thread.
I’m using the code we already talked about:

We are adapting this code on 2 different multivalue Jira fields:

At first, it seemed to work properly. After a deep dive into our data, we found that this code was able to correctly detect value at the level where it was valued, but it wasn’t able to spread this value to the lower levels.

To give you an idea, this is was I see for the field valued only at the highest level (Initiative):

The related lower levels are all at (none) value.

I tried various modifications to the above code, but nothing seems to work.

Am I missing something?

Hi,
sorry but I’m still stuck with this strange behavior.

Any update or suggestion on that?

Sorry for the period of silence.

My last suggestion was not in the context of the previous thread. Unfortunately, the multiple value fields cannot be inherited down by the setting “update_from_issue_key”.