Is there a way to show the number of users who have participated in the sprint? I’m trying to map team size against the number of points to show changes related to size of the team.

I did see some other people had done this via a separate data set but I wondered if its possible to do from the history of who was involved on the tickets in the sprint?

Count of "JIRA users", previously member's selected, that participated in each Sprint
daina.tupule January 15, 2021, 7:39am #2

eazyBI supports data analysis based on several activities in sprints and some user roles involved. For example, you can count Assignees or users who made status changes (Transition author).

Here are two examples of this.

You can count assignees who were involved in a sprint using a measure Issues history;

Use an option Drill across>Assignee>user to see particular users here.

If you would like to count users who actively participated in the sprint (based on status changes), you can use this formula for Transition Author counting if they made any status changes:

Please check what formula might represent the activity in the sprint you would like to take into account. Here is my example report. There are differences in data: 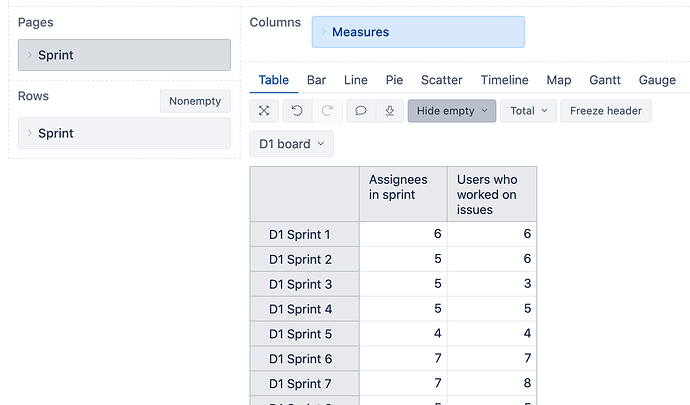 The assignees were more if some users took over issues, and some assignees did not work on them. Measure Users who worked on issues can give a higher number if some other users than assignee made a change in issues. For example, the project manager moved issues to another status.